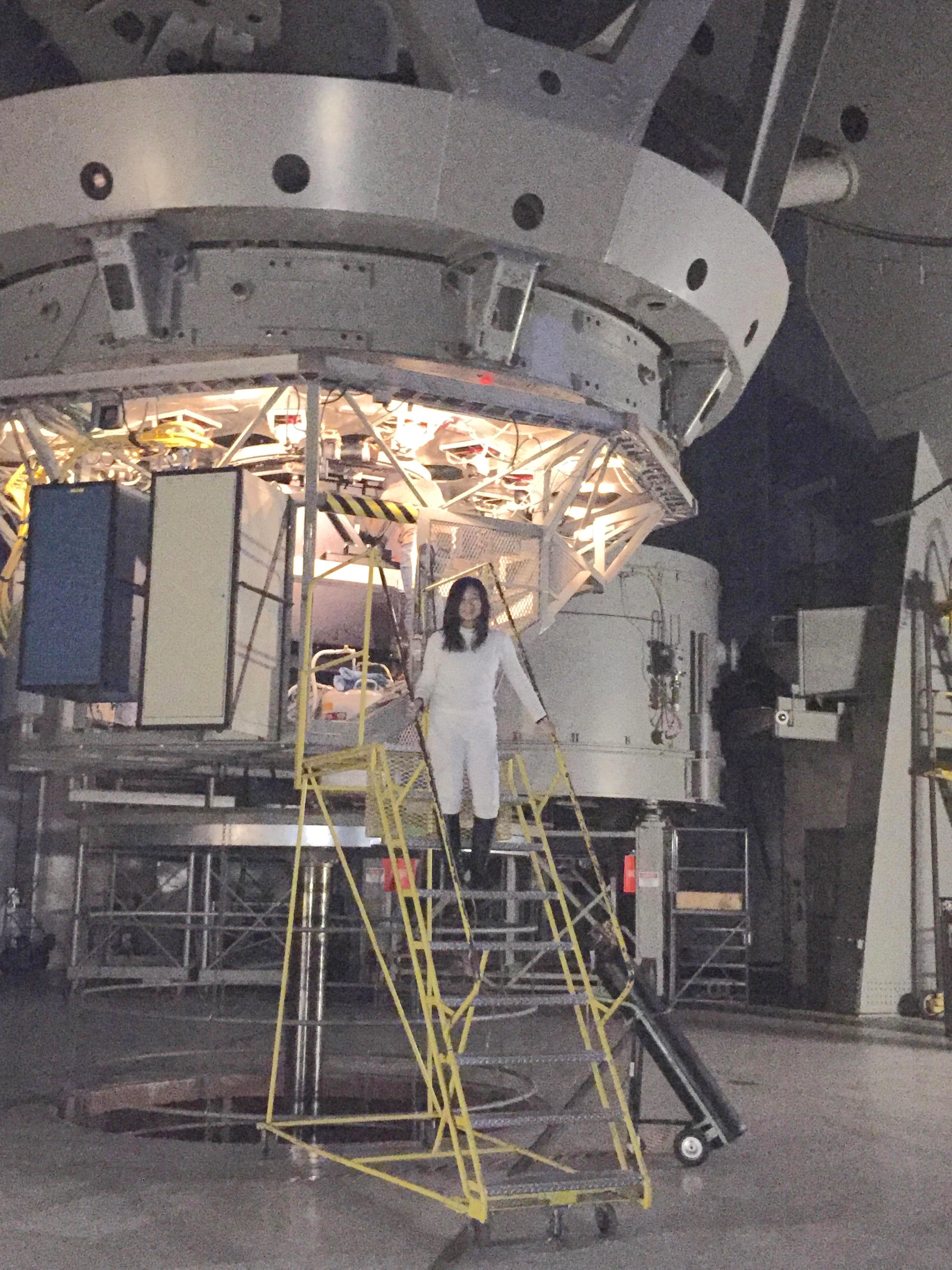 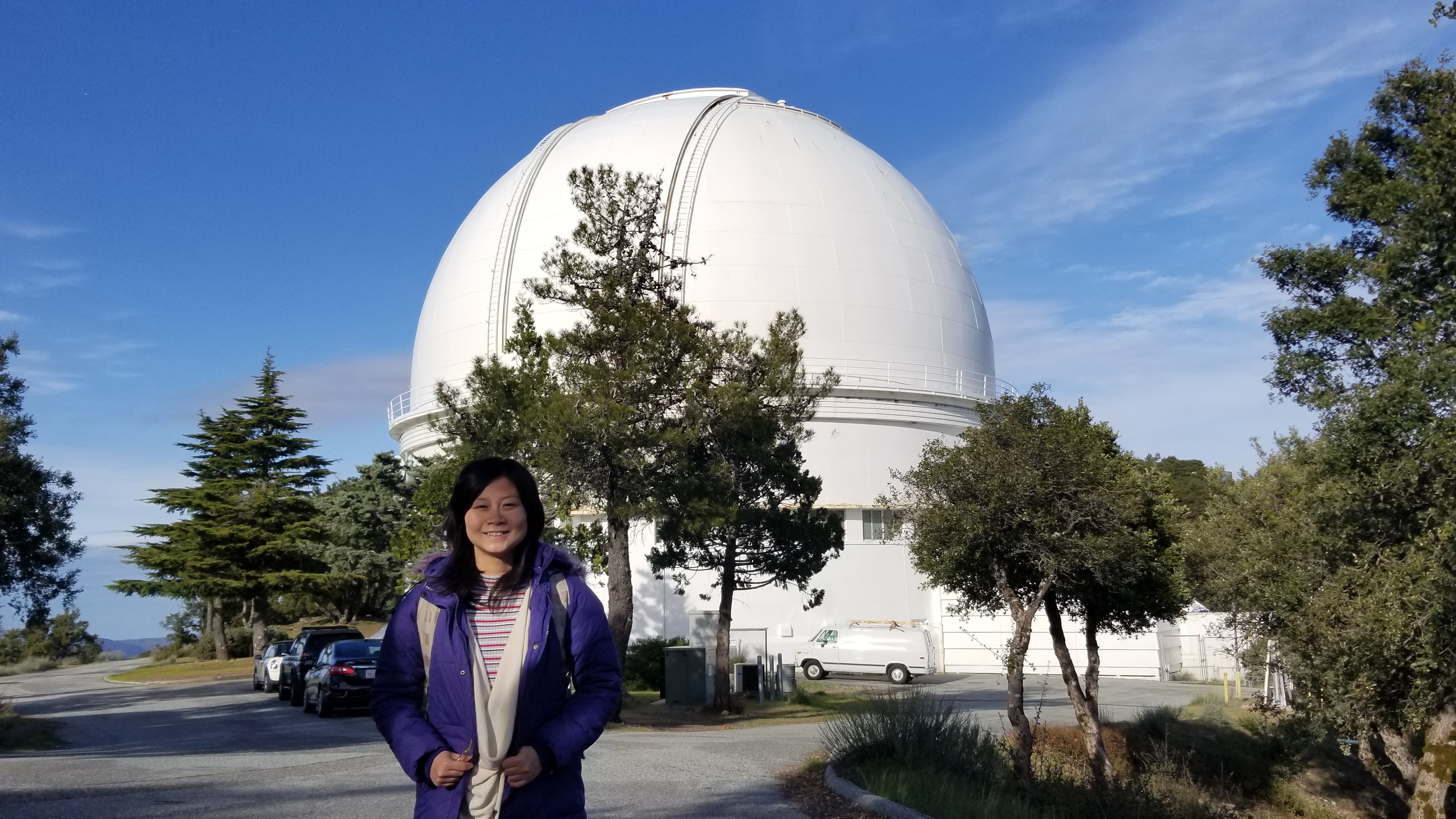 I obtained my Doctor of Philosophy from UC Santa Cruz in 2017. My thesis advisor is Prof. J. Xavier Prochaska.

My email addresses are wingyeel at ucr dot edu and lwymarie at gmail.

I have a github presence.

My curriculum vitae is available here.

This information may be useful for your searches and citations. My first name is "Marie Wingyee" and my last name is "Lau." I gave myself this name in Grade 7, with reason you can infer from my thesis' epigraph: To the brilliant scientist and human, whom I name myself after, who had said, "Nothing in life is to be feared. It is only to be understood. Now it's the time to understand more, so that we may fear less."

I am a major contributor to (and largely concluded) the Quasars Probing Quasars survey, together with Prof. J. Xavier Prochaska (UC Santa Cruz), Prof. Joseph F. Hennawi (UC Santa Barbara), and Prof. Robert Simcoe (MIT). I maintain the homepage, which has instructions for downloading the public database (please do). QPQ is designed to examine gas related processes in the context of massive galaxy formation, as well as quasar feedback. The QPQ survey selects closely projected pairs from SDSS and other surveys. To date, the sample comprises 700 pairs to within 1 Mpc separation. 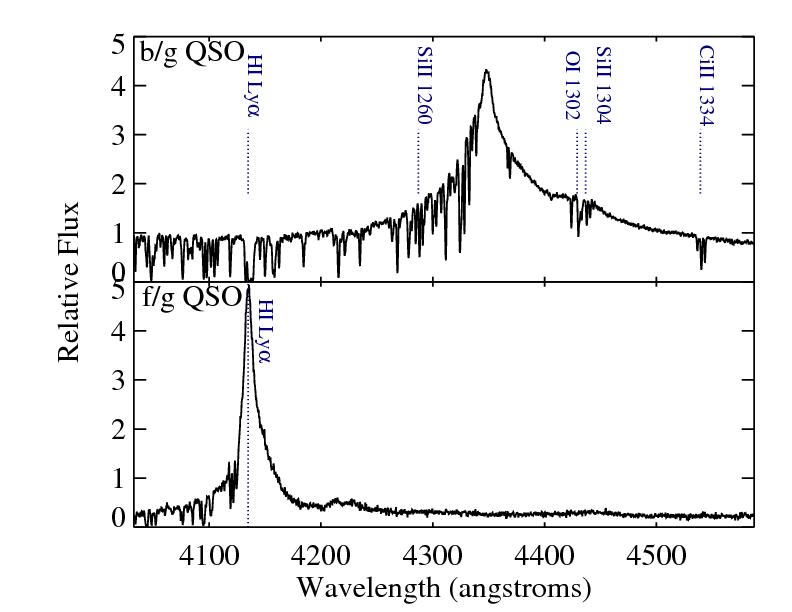 We found a high incidence of HI and CIV absorption in excess to IGM average, out to 1 Mpc transverse distance from the foreground quasars. We found the velocity widths measured in absorption exceed previous measurements of any galaxy populations.

We characterize the physical properties of the cool T ≈104 K circumgalactic medium surrounding z ~ 2-3 quasar host galaxies, which are predicted to evolve into present day massive ellipticals. Using a statistical sample of 14 quasar pairs with projected separation < 300 kpc and spectra of high dispersion and high signal-to-noise ratio, we find extreme kinematics with low metal ion lines typically spanning 500 km/s, exceeding any previously studied galactic population. The CGM is significantly enriched, even beyond the virial radius, with a median metallicity [M/H] = -0.6. The α/Fe abundance ratio is enhanced, suggesting that halo gas is primarily enriched by core-collapse supernovae. The projected cool gas mass within the virial radius is estimated to be 1.9×1011 M⊙ (R⊥/160 kpc)2, accounting for 1/3 of the baryonic budget of the galaxy halo. The ionization state of CGM gas increases with projected distance from the foreground quasars, contrary to expectation if the quasar dominates the ionizing radiation flux. However, we also found peculiarities not exhibited in the CGM of other galaxy populations. In one absorption system, we may be detecting unresolved fluorescent Ly-α emission, and another system shows strong NV lines. Taken together, these anomalies suggest that transverse sightlines are—at least in some cases—possibly illuminated. We also discovered a peculiar case where detection of the CII* fine-structure line implies an electron density >100 cm-3 and sub-parsec-scale gas clumps.

The figure below shows the cumulative mass profiles of total H and metals in the cool CGM. We constructed them using the median NH and the median [M/H] within 200 kpc. 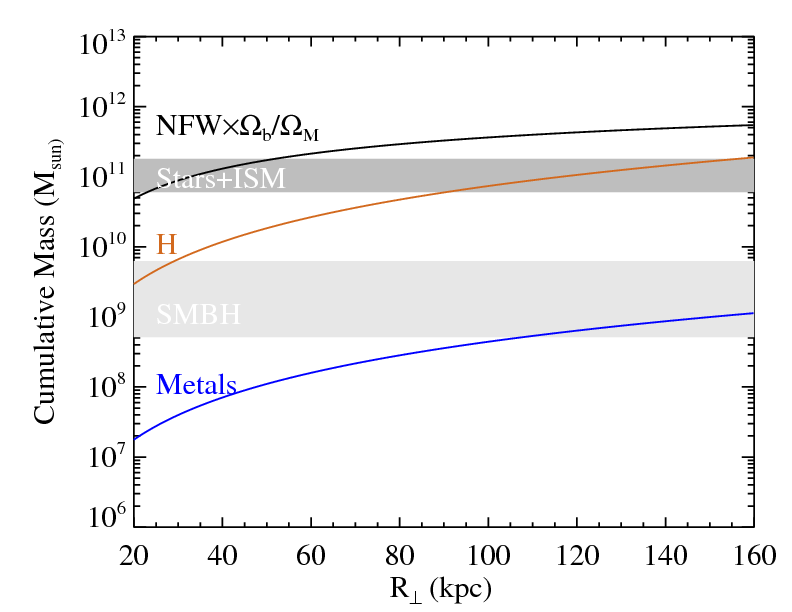 The figure below shows the mean absorption centered at CII 1334, CIV 1548, and MgII 2796 of the foreground quasars. Gaussian fits are overplotted. For the doublets, a second Gaussian with a fixed mean separation and a tied standard deviation is included in the fits. The blue dashed lines mark the absorption centroids while the gray dashed lines mark the systemic velocities. 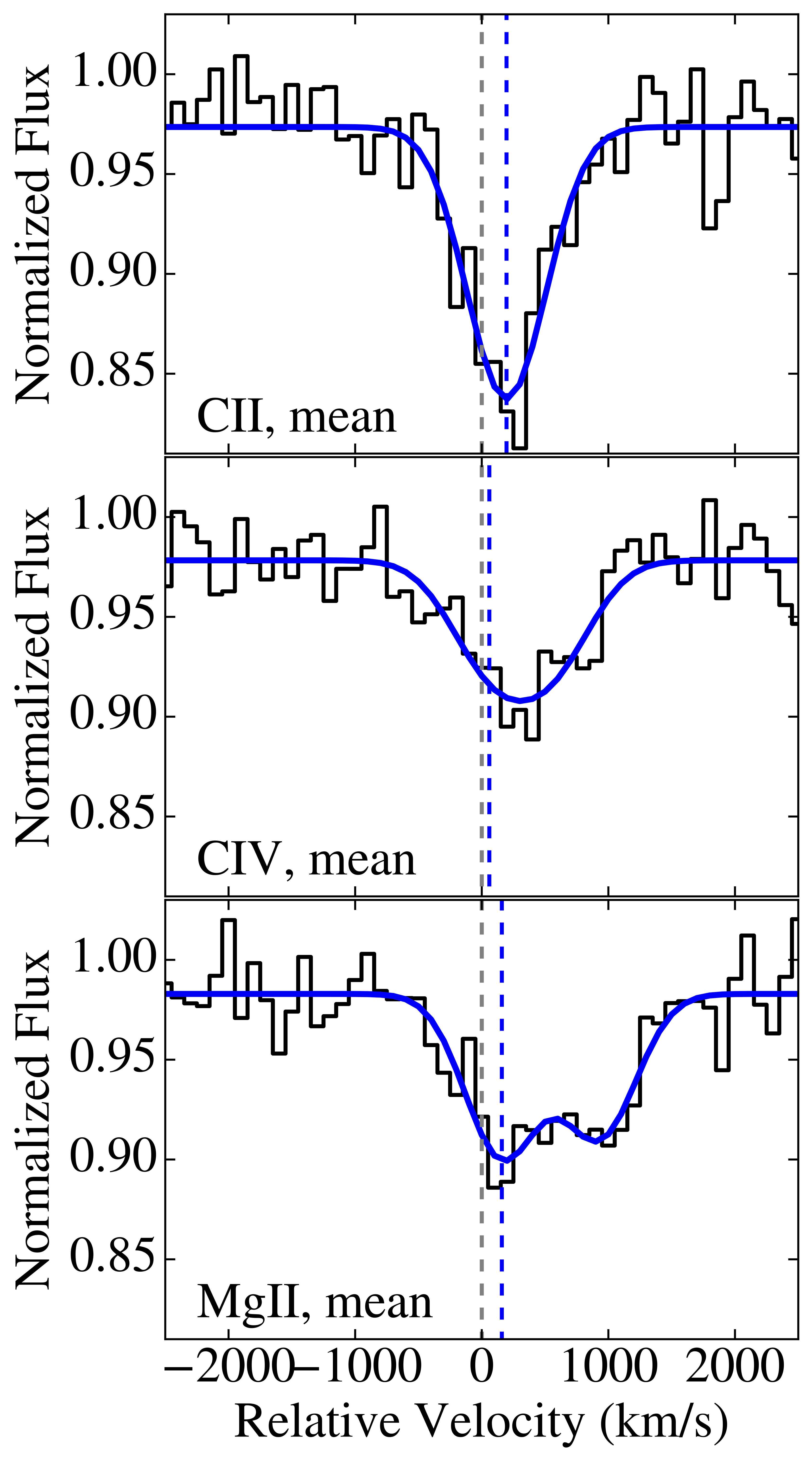 Other than Quasars Probing Quasars, I am interested in the following.

The formation and evolution of galaxies can be probed via two techniques. First is through lookback studies, where one observes statistically the progenitors of present day galaxies at high redshifts. Second is through studying present-day properties of galaxies, including their stellar populations, to learn about their past evolution. For high-redshift gas, kinematics is easily measured, as in QPQ, however chemical abundances require ionization modeling. For stars, although they have lost the kinematics information at when they formed, chemical abundances can be easily measured. The two techniques are thus complementary. Milky Way globular clusters have metallicities lower than the systems studied in QPQ, hence the stellar archeology approach using them pushes even further back in redshift. Although globular clusters are often used as fossil records, one must note they are not chemically homogeneous.

In this project we study red giants in 27 Milky Way globular clusters. We test against the hypothesis that the surface abundance variations entirely come from pre-enriched gas, as opposed to evolutionary effects of the observed stars themselves. We found that, other than the prototype Messier 13 (Johnson & Pilachowski 2012), NGC 6388 also shows significant anti-correlation between the [O/Fe] ratio and stellar luminosity. Eight globular clusters show significant anticorrelation between [Na/Fe] and stellar luminosity. Since the stars formed at about the same age, a dependence on luminosity translates to stellar evolution. Bimodality possibly exists in [Na/Fe] distribution of several globular clusters. We have further observed oxygen-poor red giants in Messier 13 with Shane/Kast for the CN absorption band, to investigate correlation patterns with Na and O.

The figure below shows surface [O/Fe] and [Na/Fe] for red giants in NGC 104. [Na/Fe] shows a positive dependence on stellar luminosity. 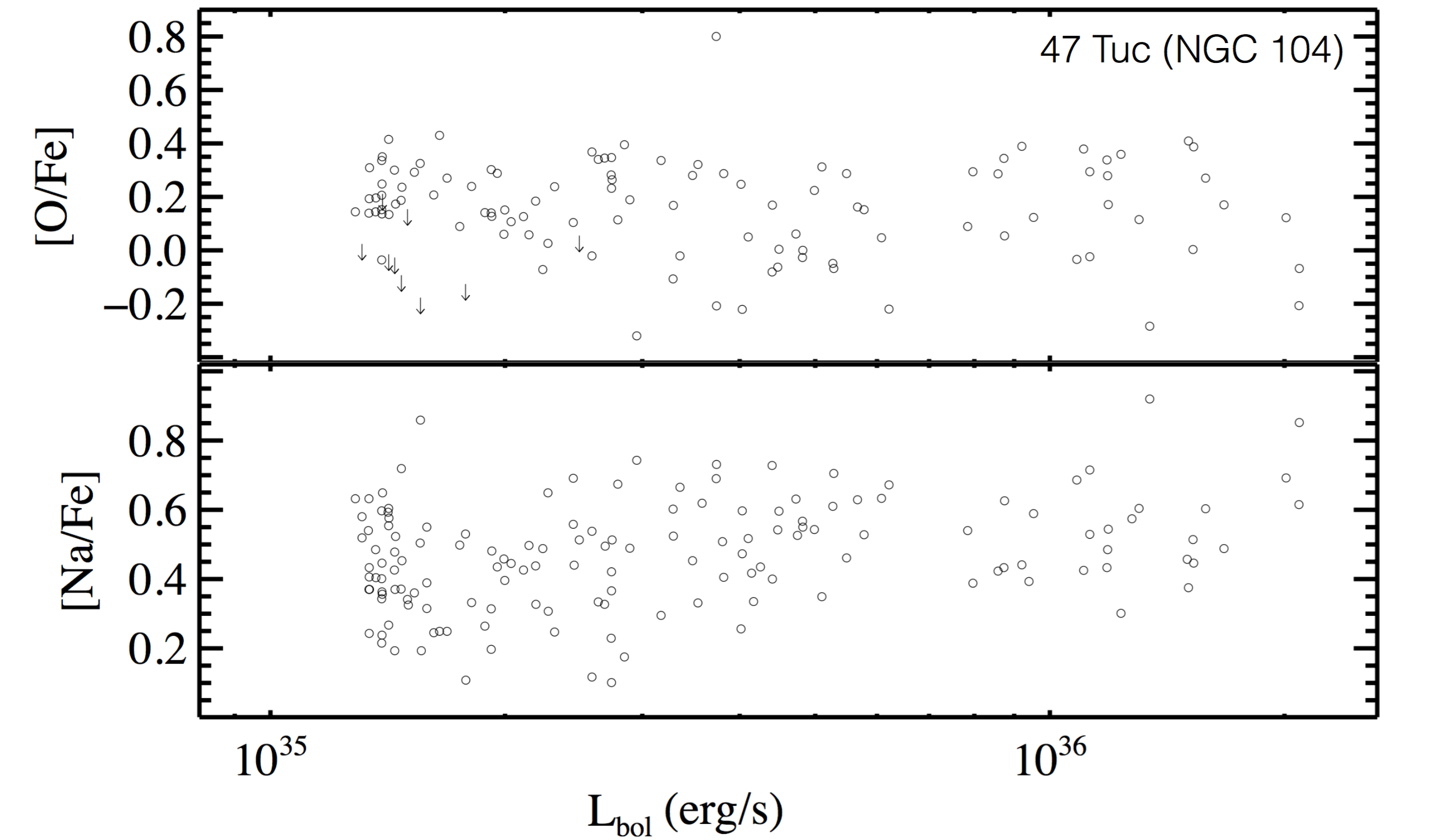 I work with Prof. Graeme Smith (UCSC) for this project. Please ask me for a report written by my interns on the archival data. Analysis of the new Shane/Kast data is ongoing.

Hydrodynamic Simulations of Quenching of Central versus Satellite Galaxies at z ~ 0.1

With Prof. Peng Oh (UC Santa Barbara) and Prof. Kristian Finlator (New Mexico State University), we use hydrodynamic simulations to test whether the properties of satellite galaxies are sensitive to models for quenching star formation in central galaxies. We evaluate the success of a simple halo quenching model in reproducing the observed dependence of quenched fractions of central and satellite galaxies on stellar mass and halo mass, as well as the observed stellar content in halos of different masses.

The figure below shows the fraction of galaxies that are satellites as a function of stellar mass. The solid blue curve is computed from an SDSS-GALEX matched sample at z ~ 0.1 obtained from Kimm et al. (2009). The dashed blue curve is the satllite fractions computed from our simulation outputs without halo quenching. The solid cyan curve is from the simulation outputs with halo quenching. 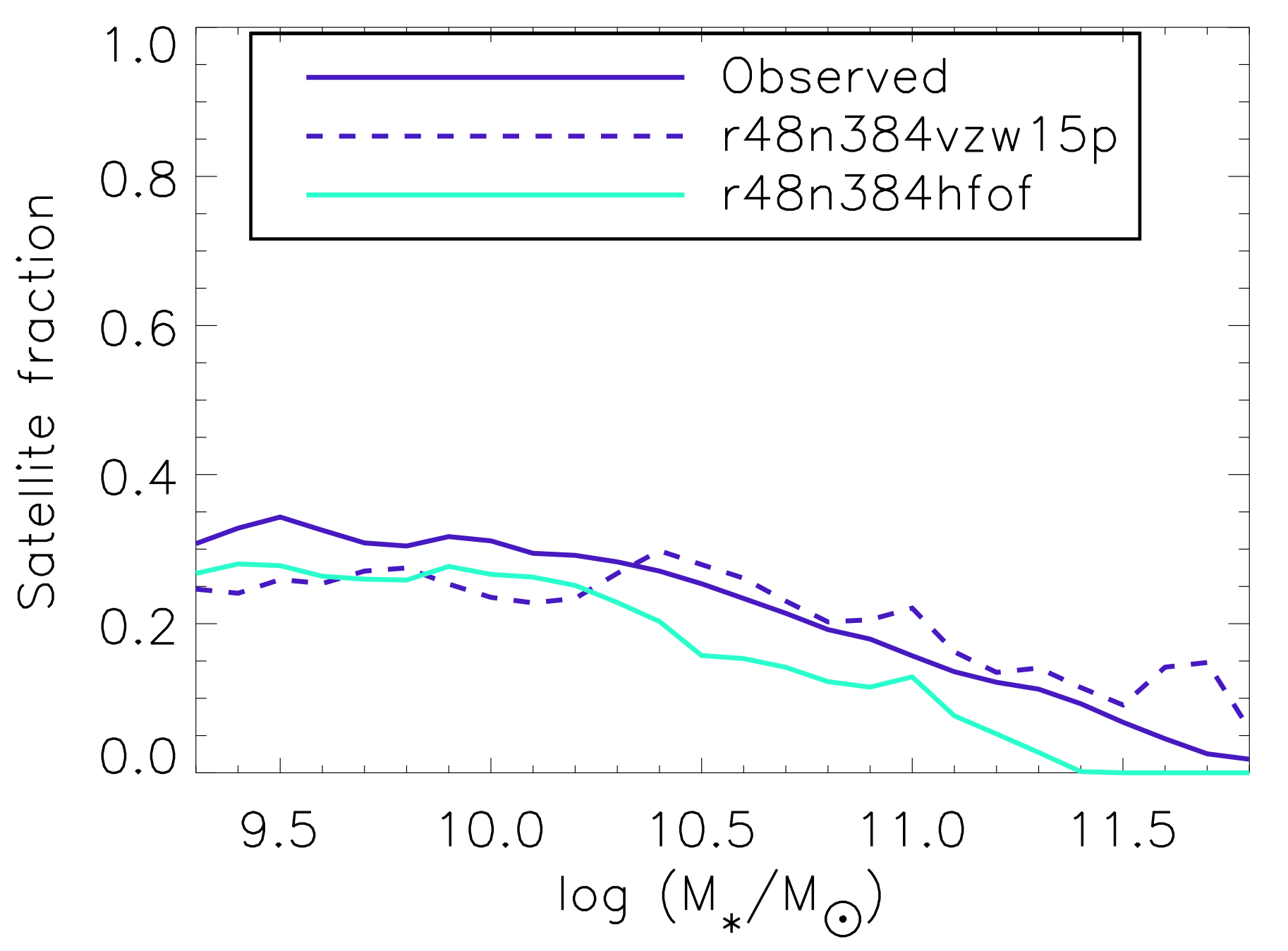 Please ask me for a first draft of the paper.

Observations have shown a high incidence of highly ionized absorbers within several thousand km/s of the emission redshift of AGNs, which are termed narrow associated absorption line systems (NAALs). On the other hand, QPQ observations of gas surrounding quasar-host galaxies in comparison to NAALs on circumgalactic scales have found anisotropic ionizing radiation, which may translate to anisotropy in AGN feedback. While z >~ 2 NAALs have been extensively surveyed in optical datasets, analyses at z <~ 1.5 have been limited to small samples with underutilized observational constraints.

We propose an exhaustive, archival search of HI, CIV, NV, OVI narrow absorbers at velocity separation > -10000 km/s from the systemic redshift in z <~ 1.5 AGNs. Our goal is to examine their physical conditions and statistical properties, using a sample of unprecedented size. We will assess their kinematics, chemical abundances, ionization states, and distances to the host AGN. We will assess correlation patterns among properties of NAALs and AGN luminosity. We will compare the line-of-sight circumgalactic medium to QPQ results to assess AGN feedback. In contrast to the high-z universe, AGNs at z <~ 1.5 have more precisely measured systemic redshifts, which will enable us to search for signs of coherent outflows and infalling gas, and separately analyze possible inflows for the first time. Moreover, the lower intergalactic opacity will allow much higher sensitivity to the far and extreme UV diagnostics.

We will release a database of UV spectra cross-matched with optical spectra of the same AGNs, with improved continuum fits and identifications of associated absorption lines. It will be distributed as part of igmspec.

The figure below shows the experimental setup. The sightline to an AGN probes gas intrinsic to the AGN, as well as gas on galactic and circumgalactic scales. I propose to test the hypothesis that these absorbers are ionized and accelerated by the AGN. 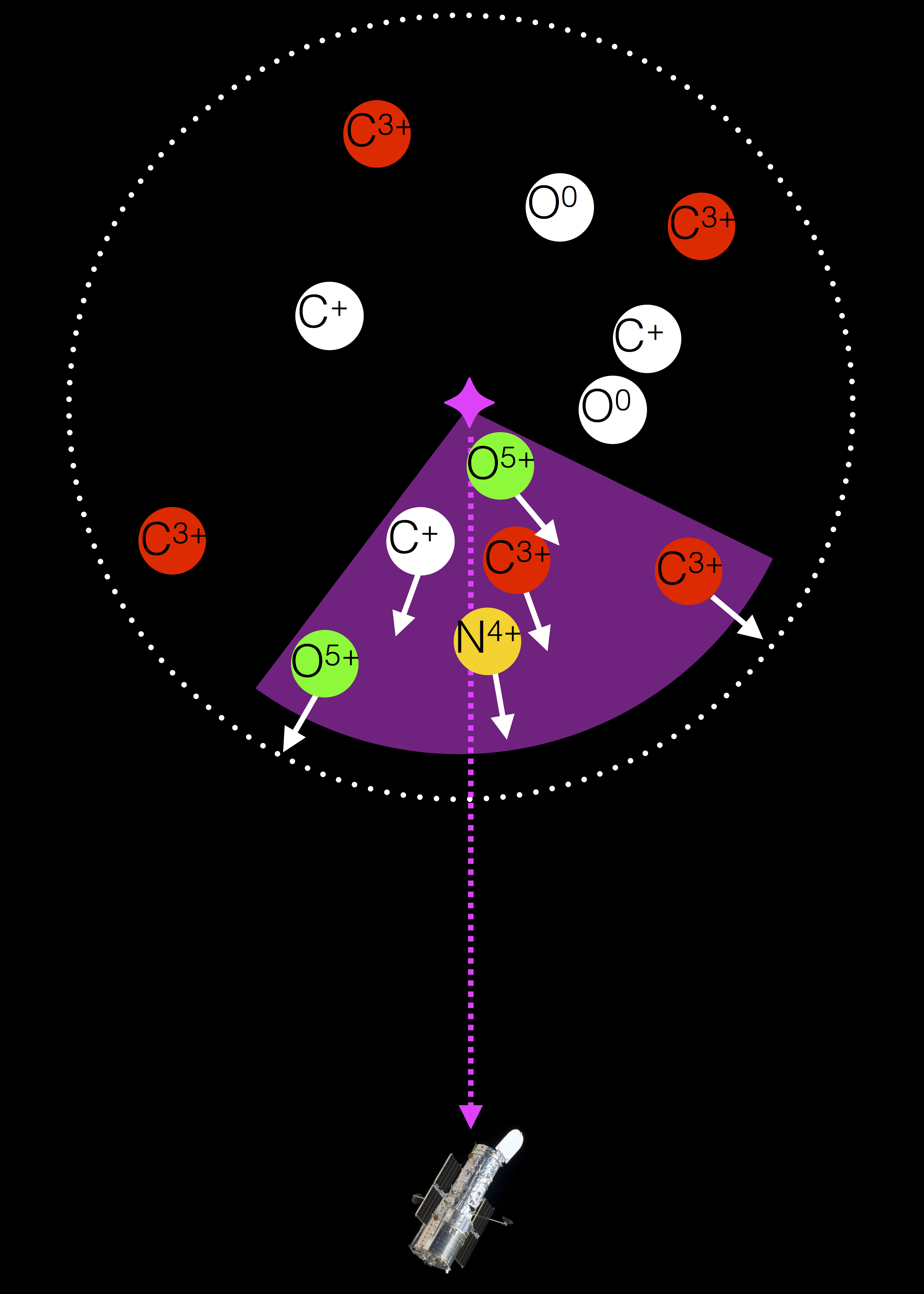 In addition, I have been a service observer and data reductionist for a wide range of research topics. Topics include dusty absorbers toward quasars, AGN reverberation mapping campaigns, spectroscopic redshifts for elliptical galaxies, and many others. I have observing experience in optical and near IR wavelengths, in long-slit spectroscopy, adaptive optics imaging, and integral field modes.

I am leading Mr. Greg Sallaberry on his senior thesis, partially under the STEM diversity program LAMAT. We work together on acquiring spectroscopic redshifts for massive elliptical galaxies using the Lick Observatory Shane 3-m telescope/Kast spectrograph. We then measure the satellite fractions at the highest stellar masses. Below is a photo of my student presenting his excellent poster. 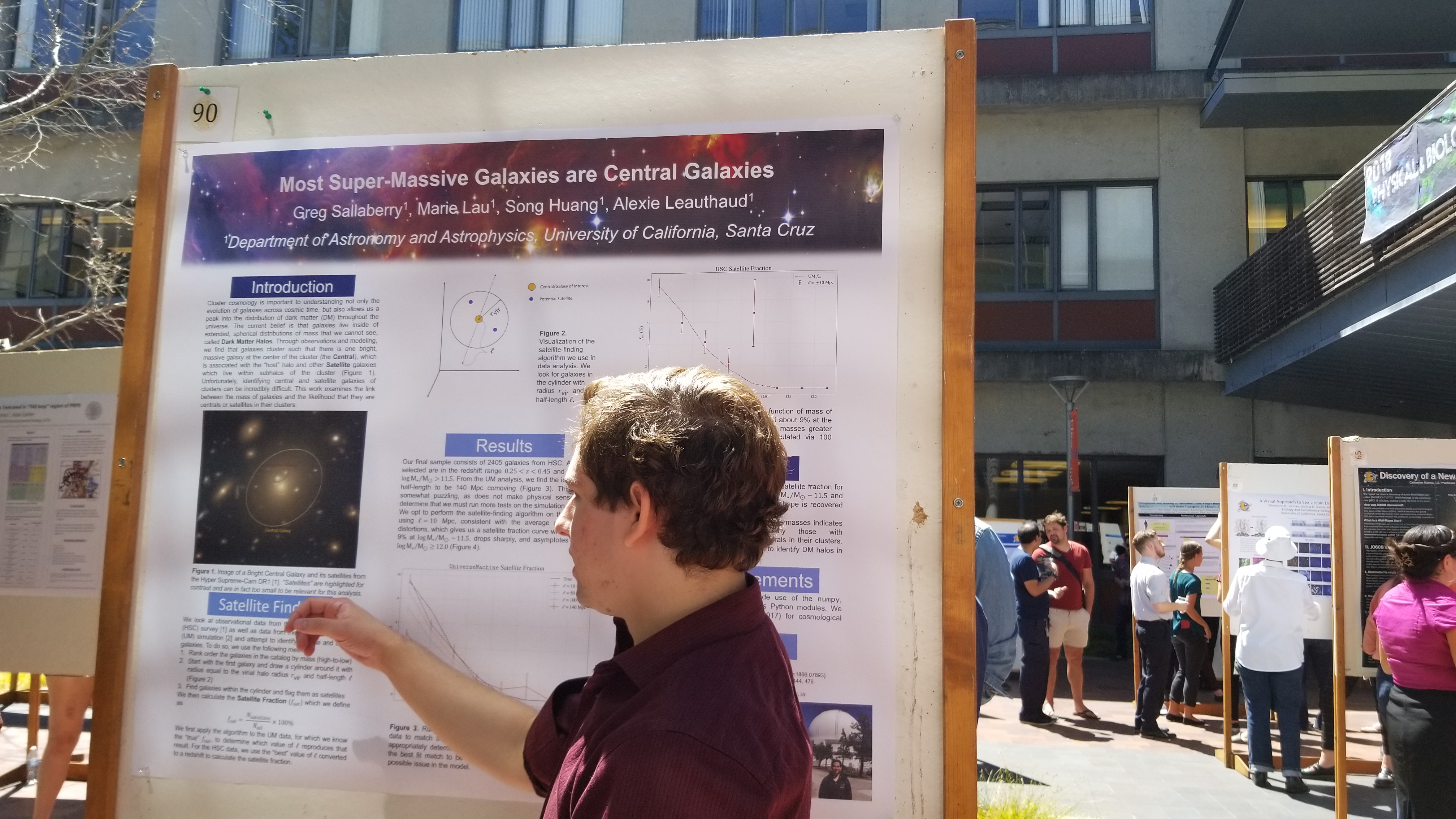 I have TA-ed the California State Summer School for Mathematics and Science (COSMOS) over two summers. I led high school students on pre-scripted astronomy projects. The projects included eclipsing binaries, galactic rotation and redshift, color-magnitude diagram, color-color diagrams, and the mass-metallicity relation of galaxies. We also observed pretty objects with the Lick Observatory Nickel 1-m telescope. Below is a card designed by my students. 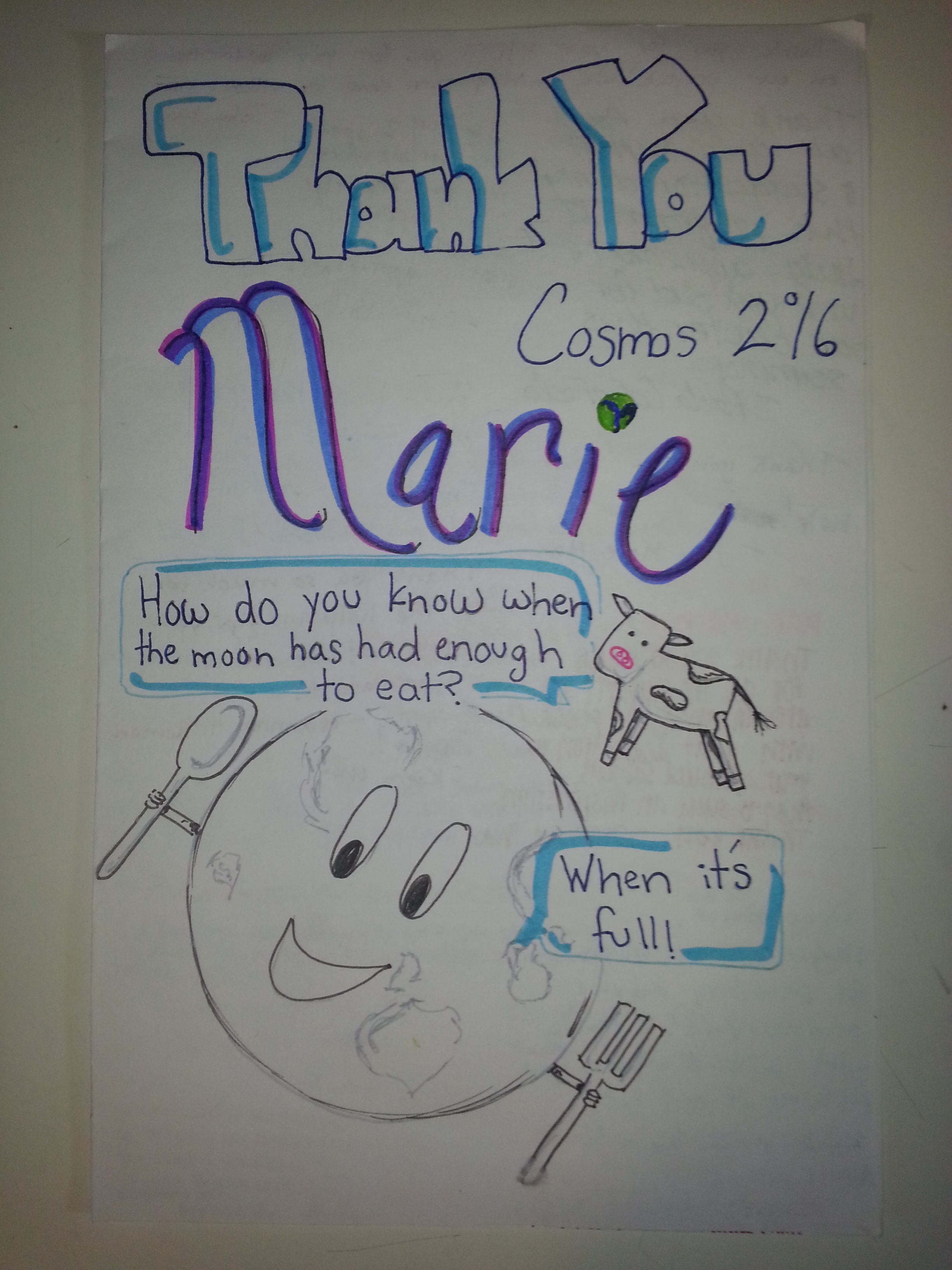 I have advised three high school interns under the Science Internship Program (SIP), over two summers. We carried out a research project on the surface compositions of red giant stars in globular clusters. I led them through the Siemens Competition in Math, Science & Technology. Below is a photo of my interns presenting the project. The low resolution is intentional. 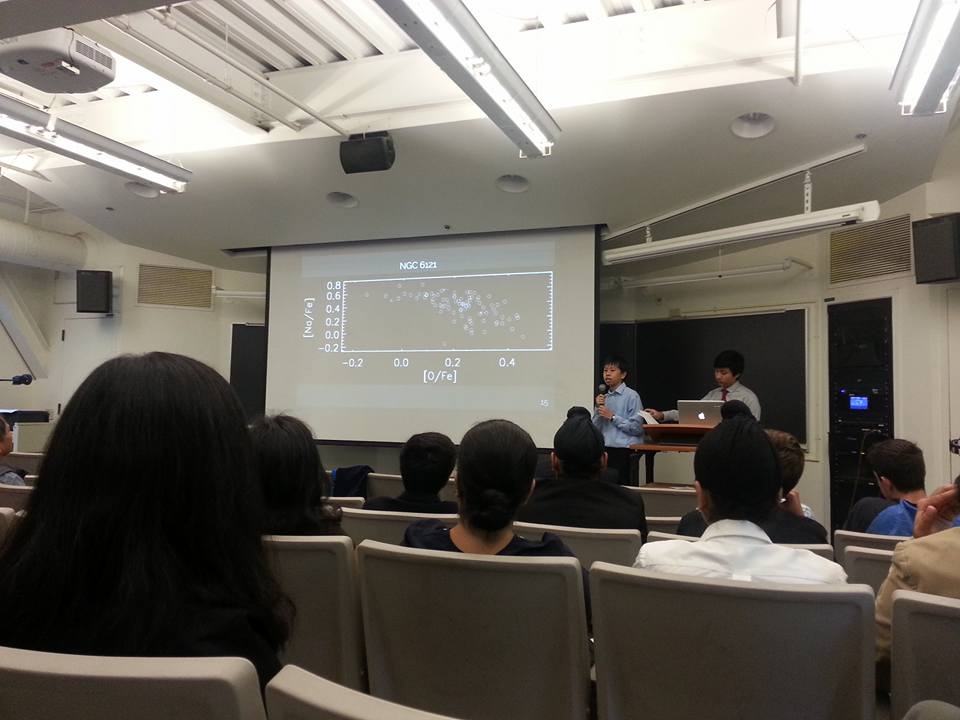 I have worked as a Teaching Assistant for eight different undergraduate astronomy and physics classes, under seven different instructors. My teaching philosophy is that, non-Western contributions in the history of science should be introduced to students.

I TA-ed a class for introductory research experience for first-year and transfer students. I helped organize their research project groups and cooperative homework labs. Below is a photo of the final poster fair. The low resolution is intentional. 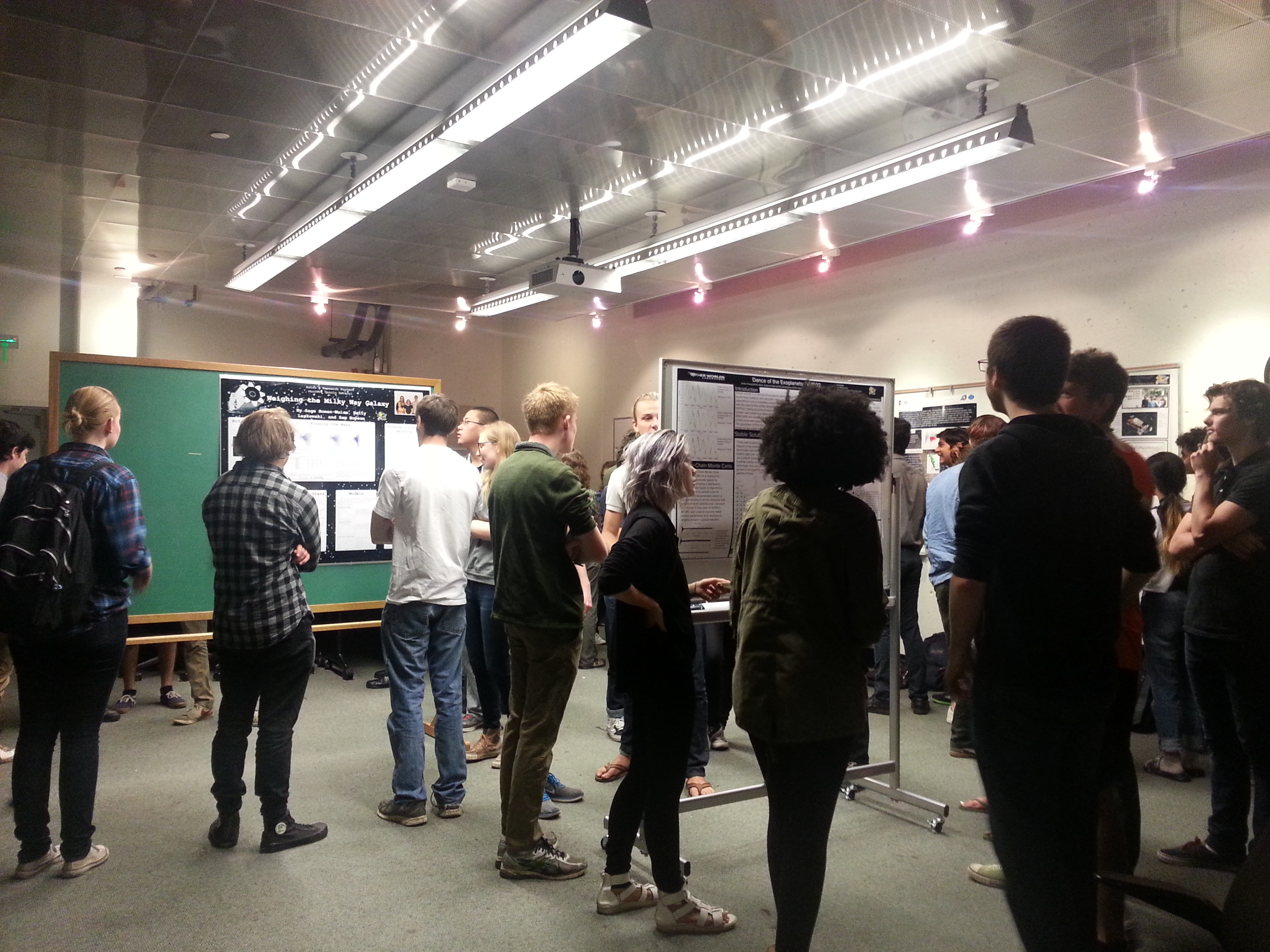 I have given private tutorials to high school students. I taught English (as a second language) and Mathematics.

Prior to beginning a career in Astronomy, I participated in short research projects in various physical science disciplines.

In addition to science, I also enjoy animals, writing, and connecting people behind a computer screen.

I care about issues concerning academics with a humble background. I welcome colleagues to reach out to me for peer support.

I am an immigrant to America. Astronomy Picture of the Day has some images of my hometown: Unsual clouds over Hong Kong, Hong Kong sky, Eclipse city.